Posted on 26 February 2013 by amandalindsey

It has been a thoroughly inexcusable amount of time since I last wrote. There are a great many reasons for it, all of which may appear in some other format some other time. I shall save them for my memoirs or some such nonsense!

Long story short I’m back, blogging and I’m happy again. Properly thoroughly deeply happy and enjoying life as one should as much and as often as possible if not always!

THANK YOU!!! Thank you to all of you who contacted me in various formats cajoling and hinting and pushing and shoving me to come back and write. After such an absence any good blog would be dead, thank you for allowing me another chance to save mine.

I thought it appropriate to start again in a similar place to where I started the first time. In Climbing the Croquembouche and Hip Hip Hooray!, inspired by MasterChef Australia (who hasn’t been) I decided to attempt the Croquembouche for my sister’s birthday cake. Recently, said sister, inspired herself by whatever series of MasterChef Australia we are up to now, made Lorraine Pascale’s Mojito Genoese Cake for our cousins birthday. Having decided that hers did not turn out quite as it should have, she promptly assigned the challenge of reproducing the cake to me. A task I put off for some time, not having all necessary equipment for baking in my new kitchen, in my new little apartment – at the start of last year I got a ‘real job’ again and moved properly to Germany. When my second hand ebay beaters arrived in the post I had no more excuses and set to it!

Using the recipe linked to above, I made the cake over two days, all in all I think it took about 6 hours. Surprisingly longer than the Croquembouche! The time though has a lot to do with my botching up the toffee twice. We’ll get to that.

The first difficulty was finding Pecans in Germany. It is really odd which things are normal and which are rare in different countries. Eventually I found some in the Galleria Kaufhof supermarket (similar to Myer) which has a selection of international foods. For the tiny packet it was something like four euro though! Then I proceeded to ruin and waste them – this is linked to the toffee issue. Here’s my experience of the Mojito cake…

As you can see I didn’t have a glass bowl to make a nice bainmarie so I improvised! 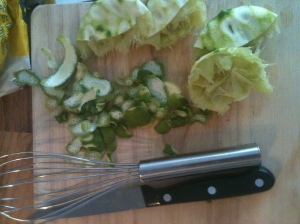 I don’t have a zester either, so this was not fun, and I cut myself. 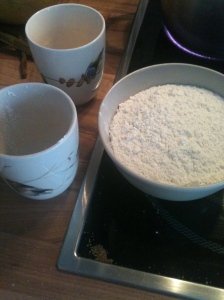 Don’t have any measuring cups in my new kitchen either so was just winging it really with online conversions from grams to tablespoons and grams to cups and guessing that these mugs are about a cup size.

The recipe said ‘whisk’ here, I started whisking, then gave up, then kept whisking thinking I really wanted to follow the recipe, then gave up and continued with the electric beaters. It took a long time! I don’t know who could whisk it.

Then pour.. Don’t let the bubbles out!

About now is when I should have taken it out of the oven.

As you will see by the next photo.

Shh!! We’ll cover it with icing!

A little uneven, we’ll cover that with syrup and icing! 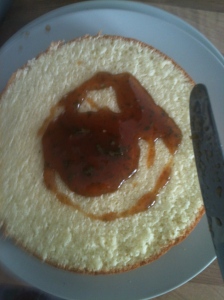 This mojito syrup is great! I had plenty left over and have since used it with fizzy water to make yummy summery mocktails! 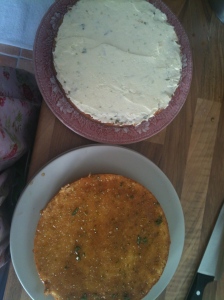 In the end I put the burnt bit at the bottom. Hoping no one would notice, you could of course still see it when the cake was cut. Probably best to just not burn the cake in the first place.

Tadahh! Now for the toffee…

So. The toffee. All else had gone reasonably well so far. I mean the cake came out burnt but it was a cake! One with no self raising flour or baking powder or anything and it still was a proper cake! Then the toffee. Here is the first batch:

I was using organic raw sugar as I’ve not yet found organic white sugar here. I’d like to blame this on the fact that I burnt it – the sugar was already caramel coloured, I couldn’t tell when it was ready! Not really a good enough excuse though. After an hour I gave up on the first batch and decided to try again. 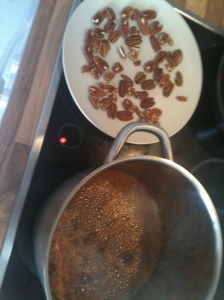 Yes. I know, you can tell, I burnt it again! At this stage though I had 5 or so hours of cake making behind me and just wanted it finished so I strew my pecans on a lightly greased plate (no slice trays either) and convinced myself that the toffee would be fine.

When the toffee was finally set I had two major problems. 1. I couldn’t get it off the plate and 2. It tasted burnt. STILL I convinced myself it would be fine and started beating it to a pulp in a plastic bag with a rolling pin. After a good half hour of scraping and beating and bashing and cries of frustration I finally gave up. All the beating with a rolling pin in the world was not going to fix this toffee. What a terrible waste of Pecans! (I rescued what I could) 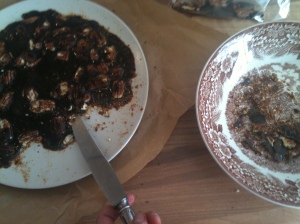 Finally, I crushed the few pecans I had left over to decorate the top of the cake with and stuck them to the outside of the cake.

So here it is: 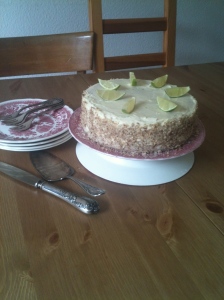 It looks pretty enough and it tasted wonderful. Still, with burnt toffee (and cake), then no toffee and too few pecans, the recipe beat me this time.

Not sure if I’ll be putting another 6+ hours in for round two any time soon, if I do you’ll be the first to know! Probably I ought first put some time into practicing toffee!

Much love to all,

This entry was posted in Birthdays, food & food experiences. Bookmark the permalink.

Dress to express even at the age of 50 something!

A Woman's Place Is at the Top

Apartment Therapy| Saving the world, one room at a time

I Endorse Bread and Typos

From Wonderland with Love