Posted on 27 December 2014 by amandalindsey

As everyone, we are now trying to get through our Christmas left overs without wasting anything.

So boxing day morning I decided to make our Christmas dinner leftovers into a breakfast of savoury crepes. This is so easy, you can use nearly any leftovers and it’s really yummy!

We had left over mushroom, spinach & pearl barley risotto – which my brother & his mate cooked up based on this recipe, but switching out half the rice for pearl barley and using duck fat from our roast duck instead of oil (I recommend you try it, so yummy!) –
Whole roasted sweet potato, and capsicum:

Then just piled our Christmas day leftovers into the centre…

Wrapped them up, put them in a baking dish with a sprinkling of cheese and pepper… 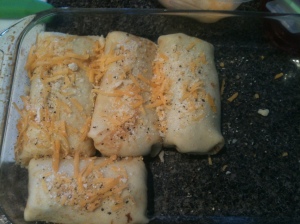 What fabulous things have you done with your Christmas leftovers? Leave a comment and let me know! I’d love more ideas… We’ve still got more leftovers 😉

Tea from strangers on trains

Posted on 11 October 2014 by amandalindsey

We had Strangers with Razors during my first weeks in Germany and now nearly four years later the nice ‘born in Southern China, lives & works in Taiwan, went to University in Toronta and identifies as Canadian’ business man in the same compartment as me on the train to Brussels yesterday morning gave me and the two lovely German ladies on their ‘girls weekend away’ each a gift of tea!

(Woohoo! Sentence paragraph in English! Can’t half tell I’ve been living in Germany for a while!)

The tea was even wrapped!

The funnies thing was how he gave it to us. Early on on the train ride he pulled a Thermos mug of tea out of his bag and started drinking it then told us how he drinks only tea and always has to get up early to prepare his thermos mugs because ‘you can’t buy tea at the trainstation’ etc. What he meant, it came out later is that you can’t get good tea (for the most part I agree). So he went on about that for a little while, asked us all what we drank (2 x tea and 1x coffee/tea/everything) then during the conversation about Jasmine, White and Green tea that followed he handed out these little wrapped tins of ‘the finest quality Jasmine tea’ from his friends tea farms. 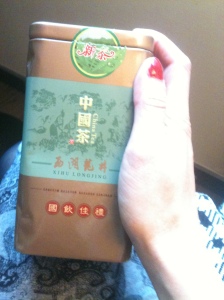 Hmm. Lovely and all, it doesn’t really look or quite smell like the Jasmine tea I’m used to though. Not sure what the rules are about taking ‘tea’ from strangers, we were only warned about candy 😛 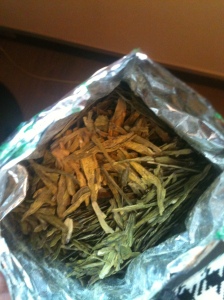 I’ll wait to get my Hong Kong’nese colleague at work to read the tin for me before I try it!

Thursday 8th of May I went to a party, where over 2 thousand people were invited, 538 people RSVP’d yes, and everyone was asked to bring a knife…

…and a cutting board. 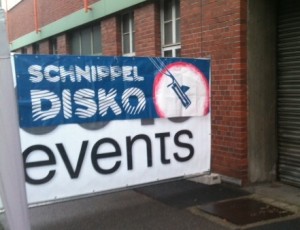 Düsseldorfs Slow Food Youth Group teamed up with Feeding the 5k to put on this fabulous event where supermarket rejects, heart shaped potatoe’s, carrots with legs, were rescued and made into food for the masses, by the masses.

Picture an old warehouse hall, set up with rows of German Beer banks all full of people peeling and chopping. There’s no more room so people are standing in groups and peeling and sitting on the stage, sofa’s and the floor to chop and peel. A DJ at the front of the room is spinning old school tunes on proper records. People are moving back and forth through the crowd, sometimes in pairs carrying crates of ‘geschnippelte’ fruit and veg, or fruit and veg going to be schnippelt above their heads. At some stage the first course is announced from the DJ pulpit and the schnippelling is over, let the eating and dancing begin! 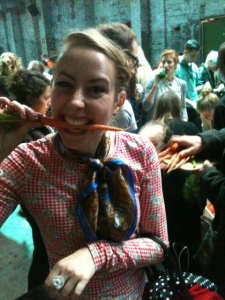 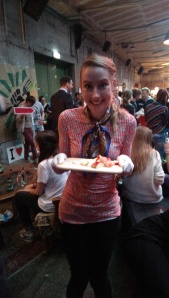 The volunteers, organisers and masses produced a (surprisingly for the size) yummy vegetable soup with fresh croutons and all! Next course was fruit salad, followed by green salad. The green salad went missing for a while, one of our group who went of to get some when they announced the salad asked one of the organisers where to find it and received an answer along the lines of ‘That’s your job! Find the salad! And when you’ve found the salad, serve the salad!’ His continued efforts to find dout from the person where he might look for the salad only resulted in more jobs… ‘and then you’ve got to find someone else to serve the salad!’ So that didn’t really get us anywhere, anyway – someone eventually found and served the salad and we were all happy.

All courses were even served on proper china plates with proper spoons! Yay! Food was great, people were wonderful, organisers & volunteers did an amazing job, it was like a massive street party. 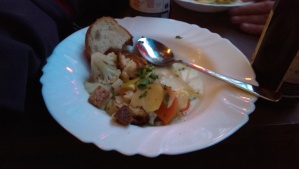 So there you go, there were more than 300 people in a room together, all with knives, alchohol was being served… and nobody got stabbed! It is possible!

The worst party poopers were a group of about 4 blokes who smoked on the dance floor and were popping the balloons 😦 big meanies.

Yours truly was filmed dancing very embarrassingly on three separate occasions throughout the disco, may pop up on a German news channel near you (if you are in NRW).

Till next time party people! 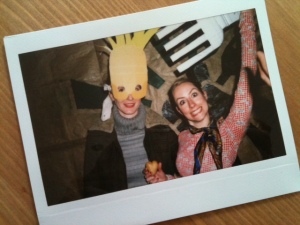 Dress to express even at the age of 50 something!

A Woman's Place Is at the Top

Apartment Therapy| Saving the world, one room at a time

I Endorse Bread and Typos

From Wonderland with Love